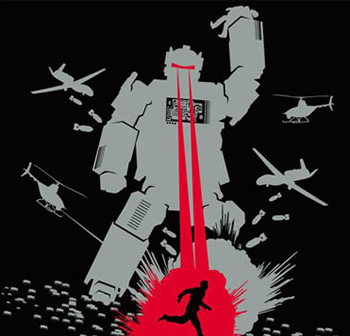 A robot or other physically autonomous machine guided by a level of intelligence and a homicidal urge to Kill All Humans. Prone to ending sentences with exclamation points as well as Spock Speak. Killer Robots are so common because A.I. Is a Crapshoot.

Humanoid killer robots abound, such as the original R.U.R., or those in Doctor Who's unsubtly named serial The Robots of Death. However, killing machines come in all shapes and sizes; from robotic dreadnoughts in space to airborne robo-fighters, through small drones and down to microscopic or even nanoscopic killers.

Although the traditional versions of this trope were robots built in a Mad Scientist Laboratory who Turned Against Their Masters, today a more common plot involves the villain finding and turning the switch on a kid's Robot Buddy from "good" to "evil", forcing the cast to either destroy it or find a way to turn it back. Especially scary because this was a good friend who has become completely heartless and bent on death.

Mechanical Lifeforms are capable of veering into this, but generally tend to skimp on the Spock Speak in favor of something a bit more colorful.

See "Second Law" My Ass! for a milder form of this behavior.

Examples (please only put examples here that don't fit into any of the subtropes listed above):

Example of:
No Waterproofing in the Future