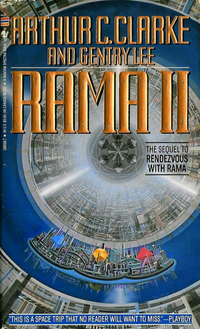 Rama II is the sequel to the novel Rendezvous with Rama. It covers the exploration of a new Rama craft, which appears after humanity has explored the first years earlier, and an ensuing crash and recovery of civilization has occurred. Because the new spaceship was anticipated, a crew of humans, including some military personnel and some scientists, has been trained to perform reconnaissance. When they arrive on the craft however, things do not go well, due to unforeseen tensions among the human Party members themselves. POV character Nicole DesJardins is left with investigating a potential murder as the exploration continues and the team and Earth considers bringing them home. The book contain multiple character studies, two (or three) romances in space, and robots who perform Shakespeare with surprising human verisimilitude. Also, new alien species and their young, and the tension that results from attempting survival in a new and, surprisingly, already populated, environment.