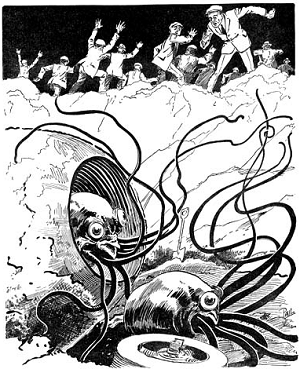 A subset of Starfish Aliens, and a popular form for aliens to take in fiction. This kind of design works because octopuses already look alien enough to most people.

This kind of alien is especially popular in Japan (particularly of the Martian variety), replacing the Little Green Men and The Greys that are often seen as the archetypical aliens in American media. Japan's take on the concept usually has them with large octopus, squid or jellyfish-like Cephalothorax bodies, long tentacles usually used to stand or to hold things, and a funnel-shaped mouth.

Lovecraftian-inspired Eldritch Abominations often fall into this role, with giant tentacles (often of the octopus variety) sometimes being all you can see of the creature.