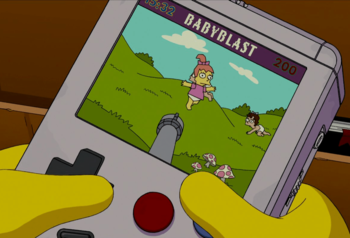 If described in detail, the game may avert Pac-Man Fever. A particularly violent game of Ultra Super Death Gore Fest Chainsawer 3000, or the wildly popular series of prostitute-murdering Murder Simulators, will not be so well described, given Hollywood Game Design. The characters may play in their own Personal Arcade. Or an ordinary, everyday moment becomes a Sudden Videogame Moment.

The game may be part of a Cyberspace environment. The player may end up Inside a Computer System, Trapped in TV Land, experiencing The Game Come to Life, Trapped in Another World in The Most Dangerous Video Game.

In the isekai genre, the setting is often a Standard Fantasy Setting with RPG Elements as part of a virtual reality Role-Playing Game.

Games are prone to defictionalization, even when not made into an officially licensed game. The game can be a Game Within a Game. Is it truly fictional then? Depends on who you ask.

If the game is an important part of the story, then the work should be added to Video Game Stories. If the game lampshades the title or sequel number, see Ridiculous Future Sequelisation. Sister trope to Fictional Board Game.