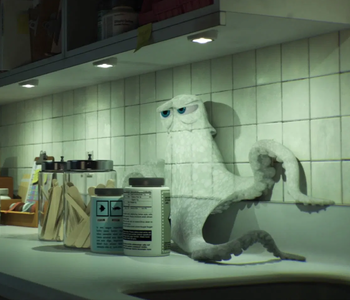 Octopus in the neighborhood?
"Well, I read that octopuses were WAAAY smarter than squids. They used their big brains to open jars, use tools, and camouflage themselves. Some could even shape-shift and mimic other creatures to avoid predators! An octopus could be hiding right under your nose, AND YOU'D NEVER KNOW IT."
— Marina, Splatoon 2
Advertisement:

The octopus has many skills that help it catch prey and evade predators. Most species can use camouflage, they can squirt clouds of ink to obscure themselves, and they can squeeze through incredibly tight holes. And, to top it all off, they are incredibly intelligent. These abilities help the octopus make up for what it lacks in tough skin.

Therefore, anthropomorphic octopus characters in fiction are very likely to be portrayed as slippery characters who are masters of espionage. Their camouflage abilities make for a great Master of Disguise. Some may even pretend to be humans.

Other cephalopods, like squid and cuttlefish, can count for this trope too. Cuttlefish are quite notable for camouflage abilities too, but the octopus is perhaps the most well-known cephalopod for having sneaky abilities. Octopoid Aliens can count as well.

Squid are less likely to be portrayed this way than octopuses, mainly because most fictional portrayals (especially of giant squid) are all brawn and no brains. However, real giant squid actually do lean towards stealth. They may not have camouflage, but they are rather shy and rarely leave the deep sea where it's dark - most of the giant squids observed alive in the wild are either juvenile or elderly squid, both of which are thought to venture to shallower water more often than mature adults.

This trope will usually overlap with Tentacled Terror, because these abilities can easily be seen as sinister, but it can overlap with Funny Octopus too.

Subtrope of Animal Stereotypes and Stealth Expert. Compare other cunning animals: Cunning Like a Fox, Rascally Rabbit, Rascally Raccoon, Sneaky Spider (Another eight-legged one!) and Those Wily Coyotes, as well as Hollywood Chameleons for another animal notable for changing colors.