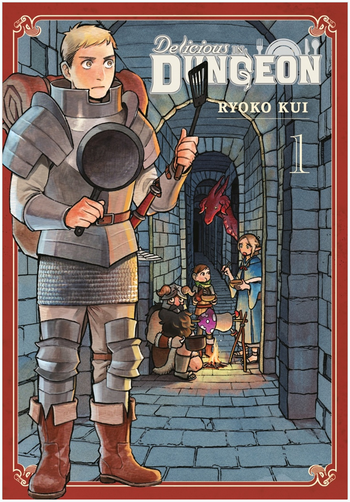 In a fantasy world of dungeon exploration, guilds go out on expeditions to raid dungeons, hoping to find the mysterious Golden Kingdom claimed to be the ultimate treasure of a particular island dungeon, said to be created by a Lunatic Magician after sinking the Kingdom to the ground. Human knight Laios Touden and his adventuring team are saved from a Total Party Kill by a fearsome beast, the Red Dragon, when his sister, Falin, sacrifices herself to teleport them all out of danger. Now she's in the dragon's belly, and it's only a matter of time before she's digested and it's too late to revive her. Laios and his friends must delve back into the depths to recover her remains - but there's not enough time or resources to buy enough rations for the trip. His solution: take advantage of the sprawling ecosystem of the dungeon itself by cooking the various monsters within into delicious, wholesome, dungeon-sourced meals.

Secretly, Laios has always been fascinated by dungeon monsters and has wanted to try eating them for a long time. However, this is typically never done and Chilchuck (the party's halfling trapmaster) and Marcille (their elf mage) are opposed. On the first floor of the dungeon, the team meets Senshi, a dwarf and experienced dungeon cook who agrees to help and joins their party as Team Chef.

Every chapter shows this team of four traveling through the dungeon, introducing environments (such as forests and lagoons) filled with new creatures. The manga focuses on world-building detailed fantasy environments, and captures a daily-life snapshot of fantasy dungeon raids and those who embark on them.

Part classic Dungeon Crawler, part Cooking Show, Delicious in Dungeon is a quirky, funny, thoughtful exploration of the ecosystem of a fantasy dungeon that may make you very, very hungry for the strangest of foods.

Delicious in Dungeon contains examples of:

Walking Mushrooms are a one of the earliest Monster met in Delicious in Dungeon... and one of the tastiest! Senshi shows the viewer how to cook one.

Walking Mushrooms are a one of the earliest Monster met in Delicious in Dungeon... and one of the tastiest! Senshi shows the viewer how to cook one.