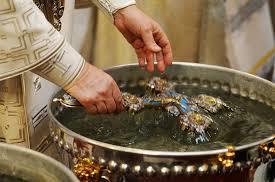 A staple of works dealing with divine powers and the supernatural, Holy Water is a substance outwardly resembling regular water but provided with considerable power against evil entities.
Advertisement:

While blessed or sacred water features in many real-life religions, its uses tend to be fairly sedate — typically, it's used in blessings, consecrations or self-purification, generally by using it to anoint someone or something or by drinking or bathing in it. This, however, isn't often quite dramatic enough for action-heavy works, and very difficult to meaningfully implement in games built chiefly around combat. Consequently, Holy Water tends to have its traditional power to ward off evil expanded into having it literally burn evil beings like acid, acting less like a sacramental and essentially more like a very exotic gun.

Creatures generally taken to be pure evil and unnatural, especially demons, vampires and other forms The Undead, are the most likely to be depicted as vulnerable to Holy Water. Depending on the work, however, any evil or simply crooked person may have reason to fear blessed water.

On other occasions, Holy Water may retain more of its real-life associations and be used for things such as protecting places and characters against future or magical harm or to provide other blessings. It may also heal and rejuvenate those who drink it, and in videogames it may likewise provide stat boosts as a consumable item.

May be used by the Church Militant, Vampire Hunter or Hunter of Monsters, or as part of Depleted Phlebotinum Shells.

Contrast Hellfire, Holy Water's opposite number in both elemental and sacred terms, and Sacred Flames, which is just opposite in elemental terms. See also Kill It with Water and Heal It with Water, both of which may overlap with uses of Holy Water (and in both cases, compare Making a Splash).

Holy Water is an angelic weapon that can utterly obliterate demons.

Holy Water is an angelic weapon that can utterly obliterate demons.