Manga / Cherry Magic! Thirty Years of Virginity Can Make You a Wizard?! 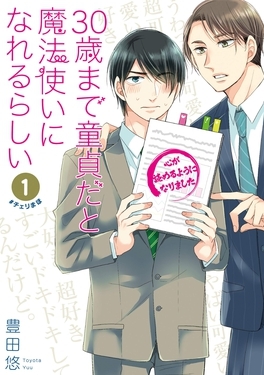 Cherry Magic! Thirty Years of Virginity Can Make You a Wizard?! (30歳まで童貞だと魔法使いになれるらしい, Sanjū-sai Made Dōtei da to Mahōtsukai ni Nareru Rashii) is a Japanese Boys' Love series written and illustrated by Yuu Toyota. It's been serialized digitally on Gangan Pixiv since September 1, 2018. Square Enix would later release the chapters in five bound volumes and announce an english release in 2020, making Cherry Magic their first boys' love manga. A live-action tv adaptation was announced in September 2020 and started airing on October 9, 2020. A film sequel to the tv adaptation was announced in November 2021 and is scheduled to premiere the following year in April.

30-year-old virgin Kiyoshi Adachi has the ability to read the mind of whoever he touches. One day that someone happens to be his co-worker Yuichi Kurosawa. Turns out he is head over heels for Adachi and has been for a pretty long time. While initially freaked out by some of Kurosawa's explicit fantasies about him, Adachi steadily comes to appreciate Kurosawa's support and even starts to reciprocate his feelings.

Cherry Magic! Thirty Years of Virginity Can Make You a Wizard?! contains examples of: