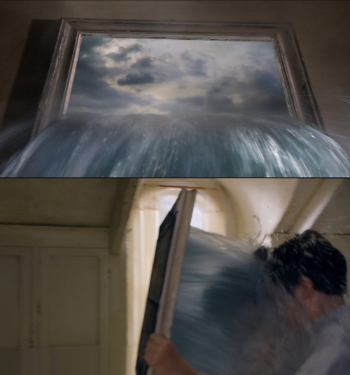 Paintings are sometimes described as a 'window into another world'. Some series, especially in video games, take this all too literally. A magic painting will contain an entire world or dungeon which the heroes must enter to defeat the enemies within. In some cases, the art style will shift to match that of the painting, emphasizing the otherness of the painting world.

If this gimmick is used more than once, a magic art gallery can be the basis for the Hub Level of a game.

In rare cases, some nefarious ill-doer or oblivious Muggle may attempt to destroy a Portal Picture while another character is inside the painting world. The results vary: if the painting was literally a portal to another world, then destroying the portal will leave the characters Trapped in Another World. The more common metaphysical position, though, is that the painting world is actually formed out of the paint and brushstrokes on the canvas, and by wiping away the painting, the world itself disintegrates.

Either way, the painting may be used as a prison.

Sub-Trope to Anomalous Art. Compare with Portal Book and Trapped in TV Land, for different mediums acting as a portal. See also Art Initiates Life. When this is done symbolically as a Scene Transition, that's Picture-Perfect Presentation.

Buster and Babs enter Acme Acres by jumping into a map of it created by the former.

Buster and Babs enter Acme Acres by jumping into a map of it created by the former.