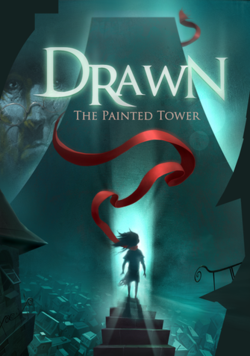 Drawn is a series of Point-and-Click Adventure Games released by Big Fish Games. In this series, your goal is to free a kingdom from control of an evil man and help restore light and happiness to the world.

There are three games in this series:

The Painted Tower: Iris, a princess who has the power to make her paintings come to life, has been hidden in a tower by her guardian Franklin to keep her safe from the wicked king who is hunting her down. However, a curse has been placed on the tower and Iris’s enemies are closing in. You have to find Iris and help her escape the tower. Updated as ReDrawn: The Painted Tower in 2021.

Dark Flight: Thanks to your help in The Painted Tower, Iris has escaped safely, but your job isn't over yet. Now you must get to the town and help Iris light three beacons which will drive away the shadows keeping the town and the people in darkness.

Trail of Shadows: Franklin tells Iris the story of a young boy who has similar powers to hers. The young boy paints a door he should never have painted, and an evil wizard appears from it and kidnaps the boy with the intent to use his powers for evil purposes.