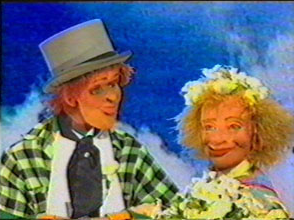 Rimini Riddle was an Irish Puppet Show that ran from 1992 to either 1994 or 1995. It was never released on home media, there were no reruns, and none of it has made it online except for two short clips and a few production stills, so almost everything known about the show comes from the vague memories of people who watched it as children.
Advertisement:

After the deaths of their parents, three siblings - oldest brother Rory, youngest brother Leo, and a middle sister named Ellen - are sent to live with their selfish, greedy Aunt Vera in her boarding house, The Rimini House.