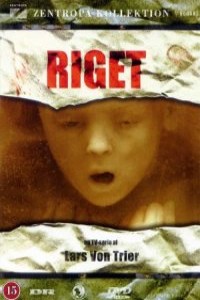 "DANSKJÄVLAR!"
"No living persons know it yet, but the gateway to the Kingdom is opening once again."
— The Opening Narration
Advertisement:

Riget (The Kingdom in English, although it also translates to The Realm) is a Danish TV series created and co-directed by Lars von Trier, who also co-wrote the script with Niels Vørsel. While it acts as a Medical Drama on the surface, it also contains copious amounts of surreal and religious horror, supernatural events, and a dark, wry sense of humor, up to and including a Greek Chorus of dishwashers with Down syndrome. Entirely filmed on location with handheld cameras and a grimy, sepia-tinted color scheme, it has been described by critics as "Twin Peaks meets M*A*S*H" (with Trier crediting the former as an influence).

The setting for the series is the eponymous Rigshospitalet (The National Hospital) in Copenhagen, with focus on the neurosurgical ward and its employees and their somewhat mundane everyday life. But, as the Opening Narration explains, something strange is slowly infesting the old building, and it is growing stronger. Mrs. Sigrid Drusse, an elderly lady with a keen interest in spiritualism, is trailing the source of the disturbances, begrudgingly helped by her son Bulder, who works as a porter at the hospital.

Meanwhile, war is brewing in the neurosurgical ward between the new, arrogant Dr. Helmer and the more down-to-earth Dr. Krogshøj (AKA Krogen (The Hook)). Helmer has recently botched a brain operation on a young girl and is trying to hide the evidence, which will give Krogshøj the advantage. The Head of Department, Dr. Moesgaard, is blissfully ignorant of all this as he is busy planning his great reform of the department "Operation Morning Air". At the same time, his immature son Mogge runs afoul of his professor, the (madly) idealistic Dr. Bondo, after having stolen a head from the morgue and used it for a prank. Dr. Bondo wants to get his hands on a rare tumor in dying Mr. Zakariassen's liver. And when Mr. Zakariassen's family says no, the good doctor is driven to desperate action.

And there is something strange about the pregnancy of Dr. Petersen...

The series ran for two seasons, respectively in 1994 and 1997. It was never officially cancelled, but the deaths of the actors playing three significant characters (most notably Ernst-Hugo Järegård as Stig Helmer in 1998 and Kirsten Rolffes as Sigrid Drusse in 2000) prevented any continuation. In December 2020, however, Trier made the surprise announcement that he was going to make a third season consisting of five episodes, titled Riget Exodus, which will act as the Grand Finale to the show. Trier and a crew of both recurring and new actors filmed the new season during 2021, and the finished product is set to premier at the Venice International Film Festival in September 2022. Prior to this, a newly remastered HD version of the original two seasons were released in August 2022. Trier has said that while Exodus will continue and provide resolution to the story, it is also supposed to be a semi-independent installment and welcoming to newcomers, and as such familiarly with the two original seasons won't be strictly mandatory to enjoy the new series.

An American adaptation, developed by Stephen King and called Kingdom Hospital, was created in 2004.

Should you wish to spend more time with us here at TV Tropes, you'd best be prepared to take the Good with the Bad.
Feedback

Example of:
Black Is Bigger in Bed