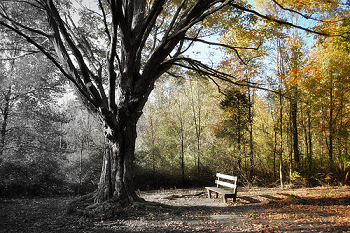 Rowlf: Hey, psst. You're in black and white.
Miss Piggy: I'm supposed to be in black and white; the color comes in a minute!
Rowlf: Oh. Don't adjust your sets, folks!
— The Muppets Go to the Movies, in a segment parodying The Wizard of Oz
Advertisement:

Oftentimes, a work will include a bit of deliberate monochrome, often to signify suppression of creativity or emotion, or to otherwise cast a drab feeling. Of course, another popular thing to do is to have color be restored to the setting (justified or not).

This can symbolize many things, among them being joy being restored to the land or personal self-discovery - it is almost always used to show something positive.

On the flip-side, showing a previously colored work to decay into black and white generally symbolizes depression or other negative feelings.

Another thing worth noting is that The Wizard of Oz is perhaps the Trope Codifier, as the transition between the sepia-tone Kansas scenes and the Technicolor Oz ones are one of the most famous parts of said movie, inspired by the original The Wonderful Wizard of Oz novel describing Kansas as grey, and Oz as very colorful. (The transition was also done to highlight the fairly recent color technology - in fact, this is why Dorothy's ruby slippers were changed from silver.) Thus, most parodies of said film will use this trope as well.

See also Splash of Color and Monochrome Past, for other tropes about monochrome and color mingling. For the TV equivalent, see Switch to Color.