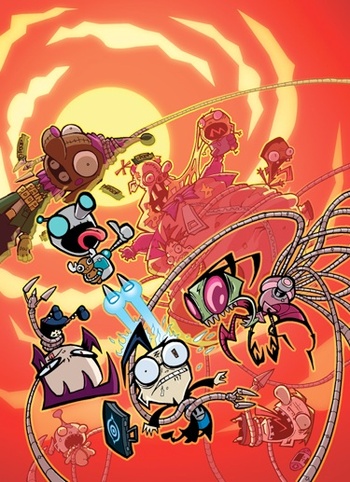 "We do not have to visit a madhouse to find disordered minds; our planet is the mental institution of the universe."
— Johann Wolfgang von Goethe
Advertisement:

A world that would be utter hell to live in. But instead of everything just being depressingly rotten like in the Crapsack World, everything is depressingly ridiculous. Nothing in the world makes sense, and the very laws of physics seem to exist for the purpose of making things turn out unfairly. Any attempt to find meaning or validation is answered with an Anvil on Head.

The protagonist is usually the Only Sane Man, who never comes out well and sometimes winds up Giving Up on Logic.

For some reason, writers who work in this genre tend to only do this genre. This tends to be a specialty genre for its creator, who is usually very, very bitter, and almost always a Sadist Show (or Sadist Book, or whichever).

Compare Cosmic Plaything, Finagle's Law. May leave the reader saying "What Do You Mean, It Wasn't Made on Drugs?" May be a result of stepping into a Cloudcuckooland or Crapsaccharine World, or of a Mad God or Reality Warper taking over. Compare and contrast World of Chaos, which is chaotic, disorganized and unpredictable, but not necessarily hellish or a torment to live in (although the two tropes can certainly overlap).

In the anime's most iconic scene, Tokyo more or less becomes a warped dream reality by the DC.

In the anime's most iconic scene, Tokyo more or less becomes a warped dream reality by the DC.