Manga / Arakawa Under the Bridge 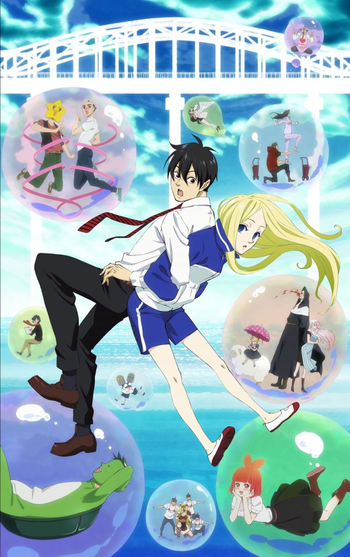 Kou Ichinomiya, heir to the prestigious Ichinomiya Company has only one mission in life: to not owe a favor to anyone. He's lived that way for 21 years. Until one day when, his pants hung up on top of a bridge, he ends up falling, with the bridge pillar, into the river down below. Nino, a girl who lives under the bridge, saves his life. Kou wants to pay her back, but Nino desires nothing except for a boyfriend; so Kou winds up living in strange community under the bridge with Nino, who also claims to be from Venus, now under the name of Recruit ("Rec" for short).
Advertisement:

There was also a TV Drama adaptation followed up by a movie in 2011 and 2012, which starred Kento Hayashi as Kou, Mirei Kiritani as Nino and another bunch of familiar actors of the medium (Shun Oguri, Yuu Shirota, Takayuki Yamada, etc).

Not to be confused with Hiromu Arakawa, creator of Fullmetal Alchemist, who presumably doesn't live under a bridge, though she may live in a nearby field...

Alternative Title(s): Arakawa Under The Bridge