Anime / The Aquatope on White Sand 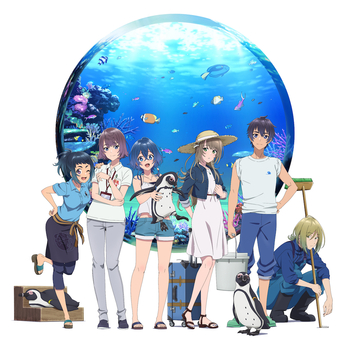 Getting wet is part of the job
Advertisement:

The Aquatope on White Sand (Shiroi Suna no Aquatope) is a twenty-four episode anime produced by P. A. Works and began airing during the summer 2021 season. It follows eighteen-year-old Fūka Miyazawa; after she yields her role as an idol unit's centre to a junior upon overhearing her desire to perform, her managers misinterpret this and take this as a sign that Fūka is losing her interest in being an idol. With her dream fading away, Fūka decides to run away and finds herself in Okinawa. Here, she encounters a fortune teller and decides to head east, eventually coming upon Gama Gama Aquarium, which is being run by deputy director Kukuru Misakino, a high school student. Wishing to leave her past behind and stay in Okinawa, Fūka implores Kukuru to give her a job at the aquarium, but quickly learns that working at Gama Game is no easy task.

However, when she learns that Gama Gama is in dire straits and is scheduled to shut down by the end of the summer, as well as Kukuru's resolute determination to save the place she's come to count a second home, Fūka decides to do her best and help Gama Gama succeed – even though her dreams are lost, Fūka feels that it would be worthwhile to at least see things through and help Kukuru pursue her dreams. The Aquatope on White Sand is directed by Toshiya Shinohara, written by Yūko Kakihara, and Yoshiaki Dewa. The series is available for streaming

This show is the third in P. A. Works Thematic Series of "Girls Working" alongside Shirobako and Sakura Quest.

The Aquatope on White Sand provides examples of: