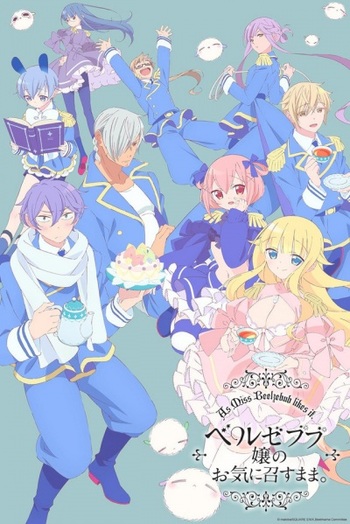 As Miss Beelzebub Likes (ベルゼブブ嬢のお気に召すまま。) is a slice-of-life comedy manga written and illustrated by Matoba. It ran in Monthly Shonen Gangan from 2015 to 2020.

Most people tend to think of Hell as a dark and dreary place, with torture, torment, and danger lurking every corner. Well, this cannot be said towards this universe. Here, Hell is known as the paradise of Pandemonium, where angels who have turned into demons work. The demons of Pandemonium all admire the wise and capable ruler Beelzebub, including Mullin, who becomes her head attendant. However, as it turns out, she's secretly a klutzy airhead with a sweet tooth and a love for anything fluffy and cute. Mullin is shocked by this, but nonetheless, he strives to get closer to her the best he can.

An anime adaptation aired between October and December 2018, produced by Liden Films. It can currently be legally viewed on Crunchyroll. The manga is also licensed in North America by Yen Press.