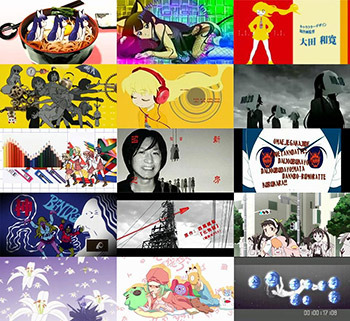 Some of the openings that Studio SHAFT has made for its shows.note From top left to bottom right: 1–2 Tsukuyomi: Moon Phase; 3–5 Pani Poni Dash!; 6 Negima!?; 7 Hidamari Sketch; 8–10 Sayonara, Zetsubou-Sensei; 11–14 Bakemonogatari; 15 Natsu no Arashi!
Give me some rope, tie me to dream
Give me the hope to run out of steam
Somebody said it could be here
We could be roped up, tied up, dead in a year
I can’t count the reasons I should stay
One by one they all just fade away
— "At Least It Was Here" by The 88, Community theme song
Advertisement:

A Theme Tune which consists of random, surreal lyrics with little direct relevance to the show.

Increasingly common for the Sitcom, possibly an outgrowth of the Thematic Theme Tune, intended to convey the "theme" that "This show is wacky" or will make you go "WTF."