Manga / You're Under Arrest! 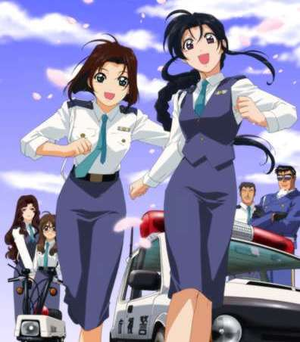 They're cute! But the way they deal with law breaking thugs sure isn't!
Advertisement:

You're Under Arrest (Taiho Shichauzo) is a manga by Kosuke Fujishima which ran from 1986 to 1992. It eventually became an OVA, and now has been through three TV anime series (with the first having 52 episodes, the second having 26, and the third having 24 respectively), an animated movie and a Live-Action Adaptation with a Playstation game, followed by an OVA set in Los Angeles and another OVA spinoff centering on the officers in Bokuto in a slice of life-type setting in wacky situations.

Natsumi Tsujimoto is a new recruit, late for work on her first day at Bokuto Precinct's traffic division. She hops on her moped and drives recklessly at top speed toward the police station on the sidewalk, down the stairs, and with consummate skill. Unfortunately, patrol officer Miyuki Kobayakawa spots her and chases her down.

When Natsumi gets to the police station, she learns that she has been assigned to be Miyuki's partner. The two spar at first, but eventually become close friends, with Natsumi occasionally deploying her moped from the back of their kei police car to corner traffic offenders...

You're Under Arrest provides examples of: