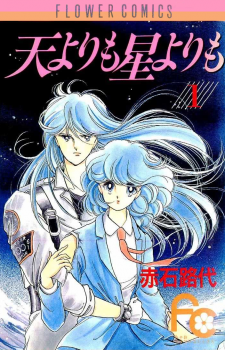 Ten Yori Mo, Hoshi Yori Mo (As High as the Sky and the Stars) is a shoujo manga by Michiyo Akaishi, written in 1987 and published in Shueisha's Ciao magazine.

Mio Mizumori is an Ordinary High-School Student, a sweet short-haired girl who lives her life normally with her parents and her pet fish. The only abnormal things are how the water in the fish tank sometimes seems to react to her moods, and a certain dream where she meets a Long-Haired Pretty Boy...

But Mio is in for a rude awakening, when her apartment suddenly blows up and is engulfed by fire. Mio survives due to a strange fact: the fish tank water enveloped her all of a sudden and shielded her from the heat and fire. Her parents and neighbors aren't as lucky, so Mio is left alone and must go to live with her maternal relatives, the Shijou family — whose most notorious member is her handsome cousin, Tadaomi.

The problems don't finish there, though: few days later, Mio is suddenly kidnapped and while trying to escape, she finds hersef cornered under a water tank. And then someone comes to her rescue: a long-haired man who sweeps in his hang-glider and helps her out, but doesn't give her his name. Later on, Mio meets Rei Narumiya, the beautiful School Idol... who looks a lot like the stranger who saved her, despite claiming not to be him. And later she finds out that the guy's name is actually Shou — as well as more secrets about him.

What's going on? What's up with Tadaomi, Shou and Rei? Also, what about the dreams that Mio keeps having, and how water seems to react to her...?

Some tropes from this manga are: