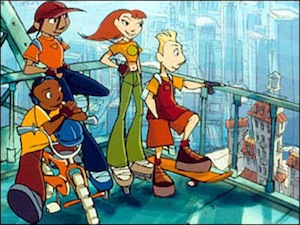 Wheel Squad is a really obscure French cartoon series focused on a group of youngsters who race on wheels. Mostly roller skates, albeit one of them isn't quite good on them. Their regular enemies are a bunch of juvenile delinquents and a white-collar criminal.