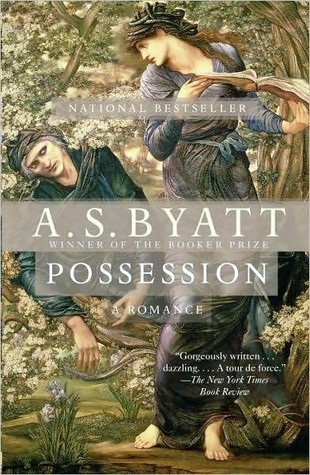 "When a writer call his work a Romance, it need hardly be observed that he wishes to claim certain latitude, both as to its fashion and material, which he would not have felt himself entitled to assume, had he professed to be writing a novel. The latter form of composition is presumed to aim at a very minute fidelity, not merely to the possible, but to the probably and ordinary course of man's experience. The former — while as a work of art, it must rigidly subject itself to laws, and while its sins unpardonably so far as it may swerve aside from the truth of the human heart — has fairly a right to present that truth under circumstances to a great extent, of the writer's own choosing or creation... The point of view in which this tale comes under the Romantic definition lies in the attempt to connect a bygone time with the very present that is flitting away from us."
— Nathaniel Hawthorne, Preface to The House of the Seven Gables.

Possession: A Romance is a novel by A.S. Byatt.

Set in 1980s England, Possession is about a scholar, Roland Michell, who while working at the London Library finds letters that suggest a relationship between two Victorian poets, Randolph Henry Ash and Christabel LaMotte. He gets in touch with a Professor in Lincoln, Maud Bailey, who specialises in Christabel's life and work, and together they begin their quest to prove that there was a relationship - but not without help, and competition, from other scholars who want their bit of credit.

Has nothing to do with Demonic Possession although there's a comparison or two, and characters talk about being possessed by ideas or irresistible impulses, in keeping with the many delightful plays on words and references.

It is also not to be confused with the 1981 drama Possession, or the 2012 Sam Raimi film The Possession.