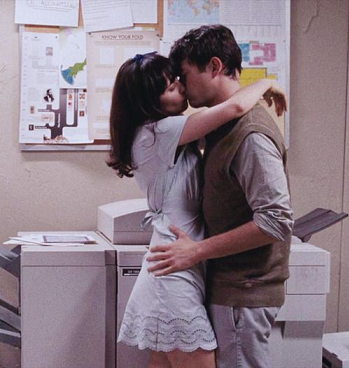 Harry: Well Dick, maybe it's the office, you know. Maybe you're destined to fall in love with whoever you share the office with.
Dick: That's ridiculous. If love worked that way, there'd be office romances all over the place. Businessmen having affairs with their secretaries, please!
— 3rd Rock from the Sun
Advertisement:

Very often fiction that features characters in a work environment will have at least one instance of on the job romance. Sometimes it's within the rules, however, it may be against the policy. Characters can get called on it or even get fired. If the pairing fails, there can be a lot of awkwardness in the aftermath.

It can be Truth in Television, although the hot for supervisor version is often forbidden in job rules to avoid ethics problems. If this does occur, one character may wind up changing shifts or departments or quitting the job. Some companies allow dating between colleagues of equal standing, although Hollywood likes to push things further with jobs like police work, where a romantic pairing would likely be a problem unless one partner changes departments.

This trope may be played differently in different cultures. Sometimes it may be even expected to happen. Some companies are aware that people want to show their best and most efficient side in front of a love interest.

Compare with Forbidden Fruit. See also Inappropriately Close Comrades, for relationships where the "office" is service in the military. See Sleeping with the Boss for when the relationship involves a boss or supervisor and a lower-level employee under him/her.