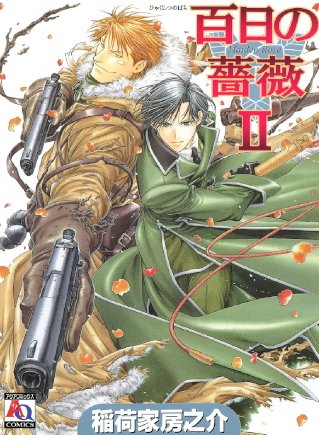 Maiden Rose is a Boy's Love manga by Fusanosuke Inariya, which began serialization in 2005 and is still ongoing. It received a two-episode OVA adaptation in 2009.

Set in a world embroiled in a complex war (ca. 1930), Taki Reizen, the heir to an aristocratic family especially favoured by the Emperor, leads his countrymen against the encroaching threat from both their enemies and their volatile allies. However, his position as savior to his people and his authority in the military are now being undermined, primarily by his acceptance of a knight from an enemy country, Klaus von Wolfstadt, who is something of a loose cannon. He is also Taki's lover.

Despite the story being about a relationship between two men, it is notable for the sheer scope of the political and military backdrop that spur on much of the plot, and the series' author Inariya Fusanosuke has embedded such rich imagery and symbolism into the mythos it truly stands out in its genre. At its most basic, Maiden Rose poignantly examines the pressures of duty and social expectation as they clash with the complexities of human desire and emotion.

Not to be confused with Rozen Maiden.