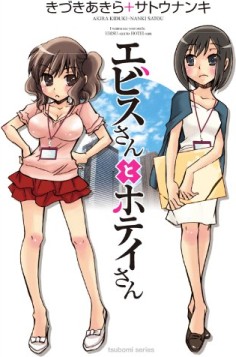 Love and Romance in the workplace has never been so cute.
Advertisement:

Ebisu-san and Hotei-san is a serialized manga by Akira Kizuki and Nanki Satou. It ran in the Girls' Love anthology magazine Tsubomi.

Ebisu Mayo and Hotei Chizuru are both Office Ladies in the same company, but whilst Ebisu works at the head office in the city, Hotei is in a branch office in the suburbs. The two had met only once, when Hotei attended a meeting at the head office, during which Ebisu was highly critical of her work. After that, Hotei hoped never to have to see her again.

However as the story begins, Hotei discovers that Ebisu has been transferred to Hotei's branch. How will Hotei be able to work with this perfectionist workaholic?