Visual Novel / In Your Arms Tonight 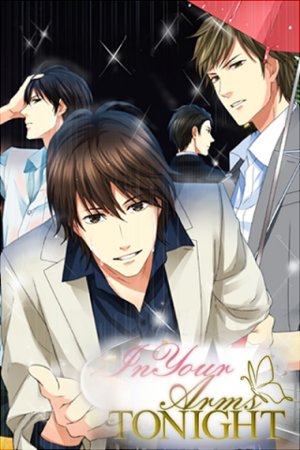 Left to right: Kiyoto, Aiba, Ebihara, and Genji
Is there a love for which you would do anything to see it come true – even if it means throwing everything away?
Advertisement:

In Your Arms Tonight is a Visual Novel Romance Game by Voltage, Inc., in which the player takes the role of a newly-married woman in her early thirties working at an interior design firm. After eight years of working in the sales department, she finally receives a promotion to her dream job in the design department... and at the same time, after only three months of marriage, she discovers that her husband is cheating on her with another woman.

Suddenly she finds herself faced with a decision: try to make her marriage work despite the odds, or risk everything for the chance to find happiness in another's arms.

A "Season 2" sequel game featuring the same themes but a new cast of main characters was released in Japan in 2014.

In Your Arms Tonight includes examples of the following tropes: