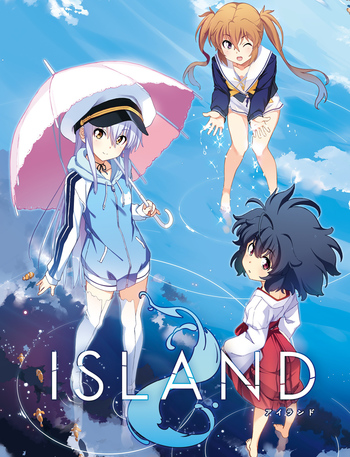 Let me tell you the legend of this island: it's a story of tragic love.
Urashima is an island far from the mainland. The people who live there lead carefree lives. But five years ago, the island's three great families suffered a series of misfortunes, and succumbed to suspicion. The people of the island cut off all contact with the mainland, and began a slow decline. One day, a young man named Setsuna washes ashore claiming to be a time-traveler and suffering from amnesia. He meets three local girls: Sara, Rinne, and Karen. Their meeting will change the course of the island's fate.
Advertisement:

An animated adaptation aired in July 1, 2018 as part of the Summer lineup. Funimation's Simuldub of the anime series premiered on July 21st, 2018. Watch it here

SPOILER ALERT: Almost all the hidden text below contains enormous spoilers regarding the nature of the time-traveling mystery. You have been warned.

This visual novel and its animated adaptation contain examples of: