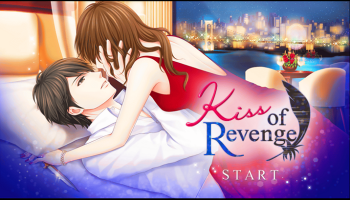 Please, you shouldn't love someone like me...
An unreported medical error caused my mother's sudden death.
12 years later... the time for vengeance has finally come.
Advertisement:

Kiss of Revenge is a Romance Game Visual Novel by Voltage, Inc. for iOS and Android devices. In it, the player takes the role of a woman whose mother died twelve years ago due to a hospital error which was subsequently covered up. Now a doctor herself, the protagonist takes a job at that same hospital with the intention of finally getting revenge on the man responsible, hospital director Sezaki - and killing him with her own hands.

Falling in love with one of her colleagues - one of whom is Sezaki's son - is not a part of her plan.

Kiss of Revenge contains examples of the following tropes: