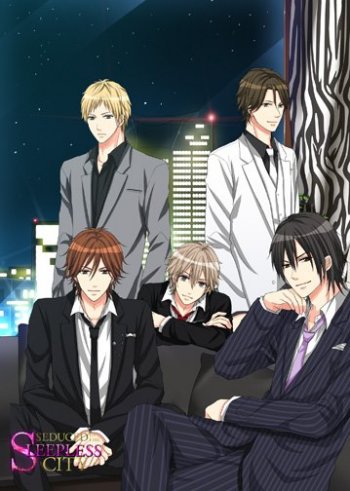 Seduced in the Sleepless City is a Romance Game Visual Novel by Voltage, Inc. for iOS and Android devices. An Americanized adaptation has also been released by Voltage USA as Glass Stilettos in Manhattan.

The heroine is a writer for the women's magazine Cinderella, assigned to cover the grand opening gala of a new casino in Roppongi, the entertainment district of Tokyo. It's a glamorous, star-studded affair attended by A-list celebrities she'd normally only dream of interviewing, but somehow before she knows it, the protagonist is meeting an A-list actor and a bestselling writer, winning a drawing for a trip around the world, having a near miss with a tiger that leads to an encounter with an F1 race car driver, getting swept up to the VIP room by the owner of the casino... and waking up in a celebrity's hotel suite after having too much to drink.

Now her editor wants her to do an extended feature on one of the rich and powerful men she's somehow made the acquaintance of - but none of them are going to make it easy.

In November 2017, Seduced in the Sleepless City was transferred into Voltage's Love 365 app.

Seduced in the Sleepless City features examples of: