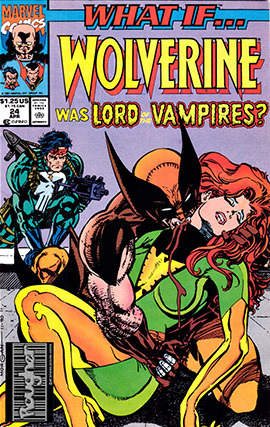 The art of doing to fictional Continuity what Alternate History does to Real Life history. The purpose of a "what-if" scenario is to consider what effects might be caused if some event or invention had come about.

For Want of a Nail is a what-if where the difference is a single, tiny change, usually with an effect all out of proportion to the cause. In Spite of a Nail is the opposite; a what-if where a change results in a world almost identical to the original, albeit with a hole in it where the missing or changed element should have been.

While some viewers may scoff at the science or events in a work, others point out that even if the premise is ridiculous in Real Life, it's obviously happening to these characters in this universe, so the MST3K Mantra should be invoked.

Compare It's a Wonderful Plot, Crack Fic, Alternate Continuity, Alternate History, Mirror Universe, Elseworld and Role Swap AU. Super-Trope to Alternate Universe, Alternate Reality Episode, For Want of a Nail, Double-Blind What-If (where an in-universe Alternate History postulates how things would have gone had the Point of Divergence done what had happened in real life). Contrast What Could Have Been, when an alternate version of the story or the elements in it was actually considered by the creators in real-life, but did not make it to the finished version.