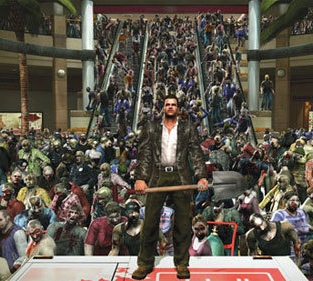 When all you have is a shovel...
Advertisement:

Frank West, a freelance photojournalist (He's covered wars, you know!), follows a tip of unknown origin into the small town of Willamette, Colorado. A military lockdown of the town is hiding a Zombie Apocalypse from the media, and Frank is hellbent on getting the story. Via helicopter, he bypasses the barricades and enters the Willamette Mall in hopes of finding the secret behind the happenings...

So begins Dead Rising, Capcom's hit 2006 free-roamer for the Xbox 360. Armed with just about anything you can find (and in a shopping mall, that's plenty), your goal is to survive for three days while getting the story. The game has two defining features: first up is the sheer number of zombies that can be on screen at once, greatly adding to the effect of a mall literally overrun with the living dead. Second, the game has a unique Combat Pragmatist-style combat system wherein Frank can pick up nearly any item around the mall to use as makeshift weapons. Your arsenal can range from more traditional weapons like baseball bats, guns and swords, to stranger things like TVs, cash registers, potted plants, and soccer balls. While the game is short (Six hours, real time, not counting cutscenes or pauses), it's a haven for fans of 100% Completion challenges (unless you want to get 100% in one playthrough), as different achievements require wildly out-of-the-way trips and are of varying difficulty.

The game is somewhat difficult and has a rather strange way of rewarding the player with experience: PP (or Prestige Points) is given to the player upon completing major objectives, like killing a milestone of zombies, saving survivors, completing cases and defeating dangerous human bosses called Psychopaths. The player can also earn PP by killing zombies in creative ways, like heating up a frying pan and smacking a zombie's face with it. This levels up Frank, who gains more health, item slots, new moves and more. Also unique is the game's take on New Game Plus: Frank starts out pathetically weak and slow at the beginning of the game, and the player must fight hard to even survive. Upon dying, the player is given the option to reload the last save, or end the playthrough at that death and transfer Frank's level over to the next run. Reaching the level cap is exceedingly difficult to get in one playthrough, so the player is encouraged to beat the game multiple times in an attempt to see everything, facilitated by the game's Multiple Endings that each requires harder and harder qualifications in order to get, and the game's rather short run time.

While the game is well-liked abroad, it sold poorly in Japan, largely due to how the game's character are homelier compared to CAPCOM's own flagship series. Chop Till You Drop, the Wii adaptation, sold half of the XBOX 360 version in Japan. Probably owing to that, Capcom gave the development responsibility to their Vancouver studio overseas for the sequel set in Fortune City, starring new character Chuck Greene, changing developer from Capcom Japan to Capcom Vancouver (formerly Blue Castle Games), and releasing across the 360, PS3, and PC.

Shout Outs can be found here.

See Dead Rising 2 for the chainsawed-and-duct-taped sequel, Dead Rising 3 for the Darker and Edgier third game, and Dead Rising 4 for the holly jolly fourth entry.

On March 27th, 2015, a feature film called Dead Rising: Watchtower premiered online, with Rob Riggle as Frank West. It's seemingly set in the period between the first and second games, during Frank's short-lived brush with fame.

Additionally, the original game recieved an HD re-release, released on September 13th, 2016 on PC, Xbox One, and Playstation 4, which marks the first time the title has been released on a platform other than the Xbox 360.

AND YET HE COMPLAINED

THAT HIS BELLY WAS NOT FULL

Example of:
The Butcher