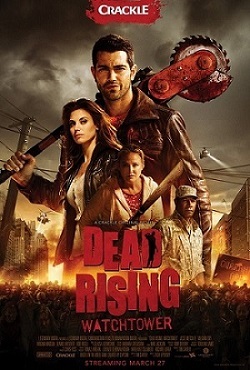 Dead Rising: Watchtower is a feature-length film that premiered on the online streaming site Crackle on March 27th, 2015. It serves as an Interquel for the Dead Rising series, and stars Jesse Metcalfe, Dennis Haysbert, Virginia Madsen, Meghan Ory, Keegan Connor Tracy, and Rob Riggle as Frank West. It is set between Dead Rising 2 and Dead Rising 3, during the rise of the Phenotrans corporation and Frank West's short-lived brush with fame. A sequel called Dead Rising: Endgame was released in 2016.

In Oregon, a reporter named Chase Carter is trying to wring some decent news out of a recent zombie outbreak that's forced the evacuation of a local city. He attempts to bring in a human interest element by talking with one of the survivors, an infectee named Crystal.

Shortly thereafter, several of the people being treated for zombie infections suddenly succumb, causing a brand-new outbreak in the refugee center. The Army forces a complete lockdown and quarantine, going so far as to shoot survivors who are caught within the perimeter, and both Chase and Crystal end up on the wrong side of it. Chase sets out to find out what caused the second outbreak, and to escape the city.