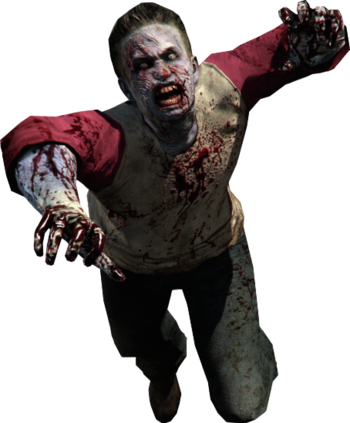 Imagine being in the middle of a Zombie Apocalypse. You rush to some safe place, but the way is blocked by a few aimlessly shambling zombies. Well, no big problem — zombies are slow, aren't they?

Well, it seems that getting close to a zombie triggers some reflex in the remains of its brain, resulting in a really fast lunge which, apparently, you weren't prepared for. Too bad for you.

Frequently featured offscreen: in every zombie film some character is due to be ambushed by a zombie, which then suddenly lunges into our field of view.

The trope isn't limited to just zombies, see below. The lunge may be replaced by a jump or a sprint, the essence being the same: drastic increase of speed triggered by prey proximity.

Note that the trope does not apply to the enemies which just have a surprisingly long attack range (e.g. stretching hands) or which are always fast (e.g., 28 Days Later).

This is a favored tactic of the Personal Space Invader. Not to be confused with a Deadly Lunch, which may be thrust unexpectedly at one by a Lethal Chef.