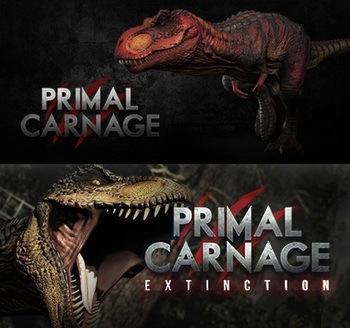 Primal Carnage is a game developed by Lukewarm Media, an independent company. The game's premise centers on a team of mercernaries being sent to an island to correct an experiment gone wrong. This takes the form of shooting up some dinosaurs. In the game, you get to play as four dinosaurs and one pterosaur. The basic point of the game is similar to Team Fortress 2 and follows many of the same principles. However, Everything's Better with Dinosaurs. Besides, who doesn't want to play as a big red Tyrannosaurus rex chomping down on overconfidant humans?
Advertisement:

“The Island”, a strange hidden world where man has taken the ultimate leap in science, where the long lost wonders of the distant past have been recreated, wonders which walk hand in hand with atrocities of the darkest nature. At present the facilities lie destroyed and abandoned, all the experiments have ceased, the buildings empty, the screams... silenced. The most meticulous of plans could not prepare them for the horrors they set upon themselves, horrors now running free across The Island.

The humans must reclaim the island they once owned, and destroy the creations that have turned upon them. But for the dinosaurs, the island is now their home, and they will not allow this to happen so easily. Two deadly predators from opposite ends of Earth's history clash on a tropical paradise. The question is: which one will come out on top? Well, that's up for you to decide...

. Development was largely dependent on donations for some time, and those were encouraged with inside peeks. (Donations have now been closed, however.)

A sequel, Primal Carnage: Extinction, was launched in late 2014 and left Early Access in mid-2015. The game is more or less an "upgrade" of the original game, with more features and game modes added. A prequel spin-off single-player game, called Genesis, was announced a couple of years earlier, but has since been put on hold, most likely to focus on developing Extinction.