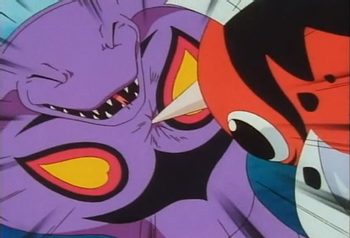 Seaking just wants to be sure to get its point across...
Advertisement:

Using your head is good and all, but sometimes using blunt force is not effective. Instead, a sharp horn on the head can make that blunt force feel much more painful. Also included are horns that can shoot projectiles or beams.

Weaponized Headgear often have spikes to be used in this regard. If there's a lot of spinning going on at the same time, we're getting into the territory of This Is a Drill.

Subtrope of Natural Weapon. See also Rhino Rampage, Brutish Bulls, Temper-Ceratops, and Horned Humanoid. Can result in being Impaled with Extreme Prejudice. For attacking someone with the other kind of horn, see Instrument of Murder.