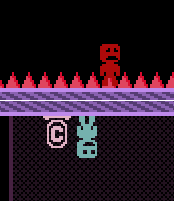 Be VVVVVVery grateful these exist!
A point within the action of a video game to which the player can return after play has been interrupted, especially by player character death.
Advertisement:

Consoles made this method popular in the dark ages when they only had a few megabytes worth of flash storage (if that) and so couldn't do proper save/load like hard-drive-equipped PCs could. Nowadays we have consoles with hard disks and cheap flash memory, but checkpoints are still alive as an efficient method for enabling savegames without spending lots of resources implementing a dynamic save system, or for simply challenging the player.

Checkpoints may either be explicit, in the form of some sort of door the player must pass through or a station he must touch, or can occur implicitly as the player reaches some point in the narrative or geography of the game. Sometimes, more often in older games, the player isn't informed at all when they reach a checkpoint.

Games can include several classes of checkpoint which vary according to which sorts of play interruption return the player to that checkpoint. For example:

Generally, in games which are organized into levels, a checkpoint occurs at the start of each level. Minor checkpoints may occur within the level. In such games, the Game Level checkpoint is usually a Save Point.

Checkpoints are often coincident with a change of scene or location, as this is a technologically convenient place from which to restart the action of the game.

Often, checkpoints will fill up your Life Meter, Mana Meter, ammo, or otherwise replenish your resources; this is what we call a Healing Checkpoint.

Game Shows in the Millionaire style have a similar mechanic. Getting a question wrong will send the contestant back to the last check-point's winnings; the difference is that in most cases, the contestant's run will end there.

A subversion is a Treacherous Checkpoint. Also see Checkpoint Starvation, when checkpoints are few and far-between or nonexistent. Compare Autosave and Death as Game Mechanic.