Literature / The Adventures of Tom Rynosseros 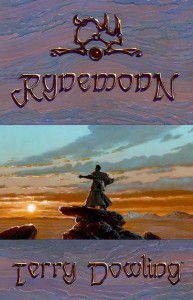 But those that cross Tom Rynosseros...

The Adventures of Tom Rynosseros is a lengthy story cycle written by the Australian writer Terry Dowling. The first story "The Only Bird in Her Name" was published in 1985, the latest "The Library" was published in 2009.

The series takes place a thousand years in the future. A mysterious cataclysm has changed the balance of power in the world; in particular, Australia is now ruled by a congregation of its native Aboriginal tribes (referred to as Ab'O in the stories). Enter Tom Tyson, a National (white) freed from cryosleep with much of his memories removed. Tom gains ownership of Rynosseros, a charvolant or sandship propelled by solar-powered kites, and, due to the mysterious plans of a rogue A.I., is given a Colour, granting him living legend status in the Ab'O society, and free passage for Rynosseros to travel the continent.

Most of the stories are stand-alones of various adventures or characters encountered by Tom as he seeks for his past, or just highlighting the world itself. A Myth Arc involving Tom and the belltrees begins in "Colouring the Captains" and culminates in "Sewing Whole Cloth."

In 1999, the Hollywood Theater of the Ear did a radio dramatization of "The Only Bird in Her Name."