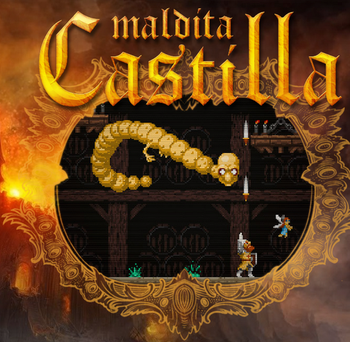 An arcade adventure of chivalry and horror

— (description on the official box art)

Maldita Castilla is Spanish developer Locomalito's biggest project to date after Hydorah. It is intended to be a throwback to the arcade age of action-platformers such as Ghosts 'n Goblins, Castlevania, Rygar, and so on.

The year is AD 1081 and many wars have caused an untold number of casualties. Witch Moura's love was one of these: a devil, Luzfarel, hears her sorrow and uses her tears as a magic key to open a portal to The Realm of Pain, flooding the Spanish region of Castile with monsters, demons and undead. The protagonist Don Ramiro, along with three other companions (Mendoza, Quesada and Don Diego), is asked by the King of Spain to put an end to this nightmare, starting from the cursed village of Tolomera del Rey to the enchanted forest where Moura's hideout is set.

An Updated Re-release has been released for Xbox One and Steam as Cursed Castilla (or Maldita Castilla EX), adding new stages, new weapons, and new bosses. EX is also available on PlayStation 4, PlayStation Vita, Nintendo 3DS, and Nintendo Switch.

FOR GOD AND CASTILE!