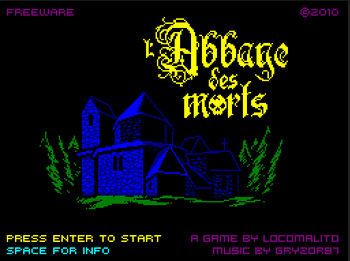 An obsolete videogame for a dark passage of history

Early XIIIth century in the French region of Languedoc. The Albigensian Crusade

, promoted by the Catholic Church against Catharism

, is taking place. Jean Raymond, a Cathar monk, is fleeing from the crusaders and finds refuge in an abandoned church, not knowing that it holds an even greater evil inside...

A minor project from Locomalito after Hydorah, made in two weeks and just 23 screens long, L’Abbaye Des Morts is no less interesting due to the choice of making it similar to a ZX Spectrum game, specifically to platformers like Manic Miner and Jet Set Willy – but not as hard, luckily.

, along with a few nice extras. A map (which contains big spoilers, obviously) is available here

Has been ported to many platforms; most interesting is the actual ZX Spectrum version

released in 2014. Most ports offer new graphics developed for them, sometimes just added color on the original graphics, other times redone while still recognizable. As of 2018 ports are still being done, with a Commodore 64 one in development and a Dreamcast one announced.