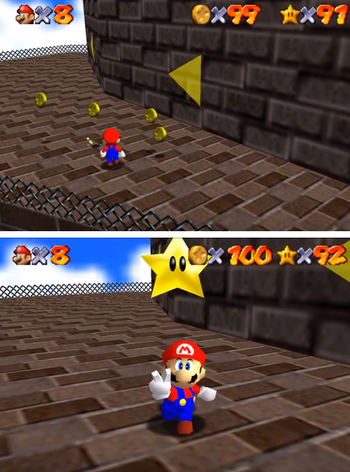 All Platform Games will have at least one type of common item that will give you an extra life if you collect one hundred of them.

Collecting these items is mostly for points, but if you can get 100 of these items, you will get an extra life, and the counter will revert to 0. One hundred is the magic number because the counters for these items usually contain only two digits.

Most of the time, the extra lives from these items are either too frequent to be meaningfully valuable or too infrequent to be meaningfully beneficial. The real reason for these items is that placing long trails of them throughout the levels motivates the player to progress onward, and the crisp 'collecting' sounds and the increasing counter gives a sense of achievement and progress to anything, even running to the right.