Video Game / Rise of the Triad 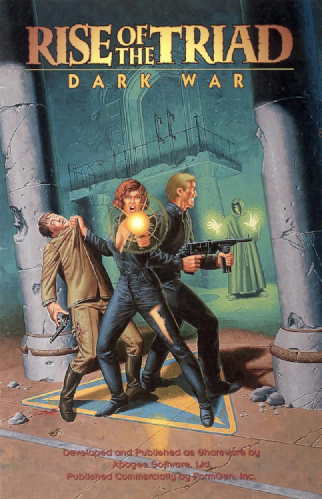 Rise of the Triad is a First-Person Shooter released by Apogee Software in 1994. There's a story, involving a United Nations special operations team sent to investigate suspicious cult activity on a remote island, but you wouldn't know it unless you read the manual. Like most early FPS's, it's all about shooting anything that moves and picking up anything that doesn't. Rise of the Triad introduced a number of gameplay innovations, many of which have become common in the FPS genre: elevated platforms, jumping, sneaky enemies that play dead and steal your weapons, areas full of poison gas, a plethora of different missile weapons, adjustable violence levels with a password lockout, breakable windows, bullet damage to walls, selectable player characters with varying abilities, and extensive multiplayer support.

In an era where "online gaming" meant two people playing head-to-head over a direct modem link, Rise of the Triad offered 11-way multiplayer games over a local area network (a dedicated server is required for more than eight players.) The game supports a number of multiplayer variants, including basic deathmatch, several variations of "tag", a race to collect the most treasure in the least amount of time, and "Capture the Triad" - the first implementation of Capture the Flag in a first person shooter. Each mode offered a number of adjustable options to further customize gameplay. The game didn't support this newfangled Internet thing, just Novell NetWare, so the only way most people could enjoy an 11-player fragfest was to take over an office or academic computer lab after hours.

The adjustable violence setting allows the player to select from four levels of gore: the self-explanatory None, small spurts of blood on Some, big damage causing enemies to turn into a little pile of mush on A Lot, and the default setting of Excessive, which can occasionally result in Ludicrous Gibs. An "engine killing gibs" cheat existed that, when enabled, would cause exploded enemies to spew hundreds of pounds of gibs that would fly across the room.

Interestingly, the shareware and "registered" (full retail) releases of the game have no single-player levels in common (the retail version did include the multiplayer levels from the shareware version). Apogee sold three different versions of the game: a basic floppy-disk version, a CD version that included additional levels and other bonus material, and a Site License CD version. The Site License version allowed for installation on up to 11 computers and included multiplayer levels designed for big games, a signed license certificate "suitable for framing", and 11 individual license cards. Apogee also sold a bonus pack that added some of the CD bonus content to the floppy-disk version of the game. The full version of ROTT supports user-made levels. Additionally, the bonus pack includes the RANDROTT random level generator which can generate a set of up to 100 levels for either single-player or multiplayer.

Unfortunately for Apogee, Rise of the Triad hit the streets over a year after Id Software (who formerly used Apogee as a publisher) had rewritten the PC gaming rulebook with Doom. Originally pitched as a sequel to Wolfenstein 3-D, ROTT was built using its Game Engine and, like its progenitor, only supported walls laid out on a square grid at 90-degree angles to each other. Although staircases and bridges could be built using floating platforms (and players could go both under and over a bridge, which you could not do in Doom), the floor and ceiling heights throughout each level were fixed. Jumping was only possible through the use of fixed jump-pads. Next to Doom, which featured walls at any angle, variable floor and ceiling heights, and dynamic lighting effects, ROTT looked dated. However, despite being graphically behind the times, it was still a damn fun game.

Apogee/3D Realms have since released the source code to the game and there is at least one enhanced Win32 port of the game available. You will need the original data files (which remain copyrighted) to play it, though. (The data files for the shareware version are still available for free.)

Preorders for the new game were rewarded with the Apogee Throwback bundle, which included the original Rise of the Triad titles, as well as both of the Blake Stone titles.

During 3D Realms' "Realms Deep" event in September 2020, a remastered source port of the original ROTT by 3D Realms and Destructive Creations was announced for a 2021 release on Steam, PlayStation 4, Xbox One, and Nintendo Switch, only for the remaster to be delayed without a release date. After two years of radio silence, the remaster was announced again during "Realms Deep 2022" as Rise of the Triad: Ludicrous Edition, this time being handled by Nightdive Studios and New Blood Interactive. The remaster will feature all episodes from the main game and its expansion packs, 4K and ultrawide support, restored cut content, a sound test and the option to switch between the original game's soundtrack and the 2013 remake, revamped online multiplayer, a new level editor and a brand new episode.