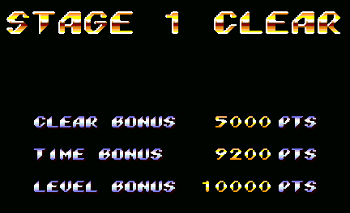 Sometimes, it's more about the numbers than the letters.
NICE CLEAR!!
— Text shown upon clearing a stage in Sutte Hakkun
Advertisement:

You've just beaten a level and a screen comes up tallying up the points you got from the coins you collected, and from any bonus objectives you accomplished. The points are totaled up from each source and added into your overall score. Even in games where The Points Mean Nothing, this screen is a popular way to give the player a breather between levels and a sense of advancement.

Some games just show you how long you took to beat the level. Often it will also show the "Par" time the developers of the game think the level can be completed in. Like you've just sweated your ass off to finish the level, it took you 48 minutes to finish and it was really hard to get it even that quickly. So below your 48:13, is the developer's Par time: 1:45. Well, maybe not totally unreachable, you just do like Bill Murray in Groundhog Day when he explained how he was able to toss cards into a hat and never miss once: "Oh, not much practice, eight, ten hours a day, every day for six months."

In newer games, Scoring Points are often replaced with statistics and a rating of the player's performance. In this case, they're vulnerable to Rank Inflation.