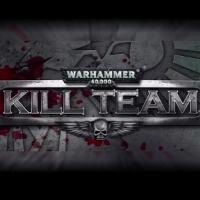 Warhammer 40,000: Kill Team is a twin-stick Third-Person Shooter released by THQ on July 13, 2011 for Xbox Live Arcade and PlayStation Network.

It is the 41st Millenium, and there is only war. The Emperor and his Imperium of Man govern all of humankind with an iron fist. He is the master of his domain by the might of his vast armies and though crippled, keeps watch over his race by sheer psychic will. The Imperial government is brutal, oppressive and totalitarian, but is the only thing keeping mankind from a grisly fate at the hands of traitors, aliens and worse. But you knew that already.

An Ork Kroozer is bearing down on an Imperial Forge World. The only hope to stop it? A squad of The Emperor's finest soldiers, his Angels of Death: the Space Marines.

The player takes control of one of four different Marines of varying abilities and proceeds to shoot, slash and special move their way through hordes of Orks, and the occasional Tyranid. These being the Space Marines, just one of them is sufficient to take out an entire Ork mob and their Warboss- but you can tip the odds further against the Orks by bringing in a friend for local co-op. Scattered throughout the levels are Aquila symbol collectables, which unlock concept art. When you're done with that, there's a Survival Mode.