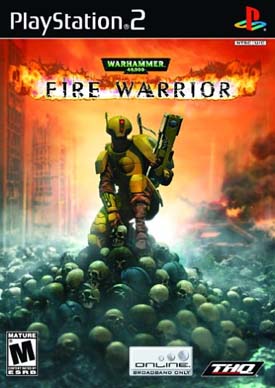 In 2003, a video game was released based on Games Workshop's ever-popular Warhammer 40,000 tabletop game. This had happened before several times (the Space Hulk series, Aspect Warrior for the Mega Drive / Genesis), but this one was a first-person shooter. Granted, the Space Hulk games technically were too, but suffered from a rather cumbersome click-to-move interface closer to that of old adventure games than modern shooters. Needless to say, all of these were subsequently overshadowed by the more popular Dawn of War series of real-time strategy games. Fire Warrior remained the only shooter set in the universe until the release of Warhammer 40,000: Space Marine in 2011.
Advertisement:

Warhammer 40,000: Fire Warrior focused on a young Tau Fire Warrior named Kais. The Tau, for the uninformed, are a relatively young species introduced to the setting in 2001, with a highly Animesque design. Originally, while naive, the Tau hardly had any Crapsacky elements to them and were a rather out-of-character attempt to inject some optimism into the relentlessly Grimdark 40K universe. This didn't please the fanbase, who saw them as the designated "good guys", and the Tau were made more morally ambivalent - new storyline included forced annexation of nearby worlds, rumoured sterilization of populations with a history of rebellion, and a "join us or die" mentality (this character shift justified by an Imperial invasion, which caused them to wise up about how hostile the wider galaxy really was).

Anyway, Fire Warrior focused on the first mission of young Kais, which over the course of 24 hours went horribly wrong. A relatively simple mission to rescue an Ethereal turned into an all-out war between the Tau and the Imperium of Man, until the arrival of the forces of Chaos forced the two sides to come to an uneasy truce, in which Kais briefly teamed up with an Space Marine Captain of the Ultramarines named Ardias, who was trying to sort the whole mess out.

All in all, it was a pretty mediocre game, meeting with average reviews. Developed for Playstation 2 and PC, it shows its age, displaying many of the hallmarks and limitations of 6th generation console FPS games. Unlike the later Dawn of War series, developed by RTS veterans Relic, Fire Warrior was made by the relatively unknown and inexperienced Kuju Entertainment (who would go on to make the Battalion Wars games). It isn't a bad game by any means — it's quite fun in places — just totally forgettable. The book based on the game however is pretty well liked, going more in detail about the Tau culture, mindset and giving the main character a backstory. Also notably, the Tau commander of the Dawn of War expansion Dark Crusade is called "Shas'O Kais", with developers heavily implying it's the same man (well, xenos).

Despite its relative obscurity, the game is available for purchase at GOG.com. However, a bit of hex-editing is required to get it to run correctly on modern resolutions without being stretched.