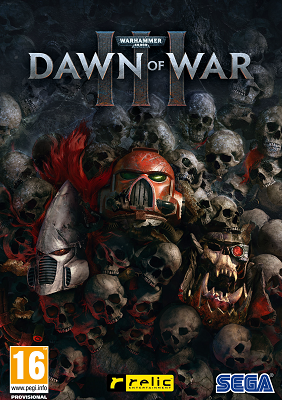 Warhammer 40,000: Dawn of War III is a Real-Time Strategy and the third game of the Dawn of War series, based on Warhammer 40,000. The game is developed by Relic Entertainment and published by Sega. Relic released a trailer on May 3rd, 2016

confirming the development of the game. The game was released on 27th April 2017 for PC.

The planet Acheron, the wandering world, will soon emerge from the Warp, and bring with it a catastrophic weapon known as the "Spear of Khaine". Three forces converge on the planet - the Blood Ravens Space Marines under legendary commander Gabriel Angelos, the Eldar of Biel-Tan led by Lord Kyre and accompanied by Farseer Macha (returning from the first game), and an Ork horde of the Bad Moons led by Warlord Gorgutz (his fourth appearance, after Winter Assault, Dark Crusade, and Soulstorm). The Astra Militarum/Imperial Guard also appear, though as a non-playable faction.

The game saw the return of base building from the first game series and large armies, whilst also retaining some elements from the second series such as Heroes, and expanded on the concept by also adding "Elite Units" and "Super Units". For Multiplayer, there was one mode available at launch that was called "Power Core". The game objective of the mode is to have players destroy their opponent's power generators and turrets defending their bases before finally destroying the opposition's power core and thus win the game. The developers stated that more multiplayer modes will be added post-launch.

As of 8th February 2018 however, Relic announced that they would no longer support the game and cancelled all planned content and expansions, citing lower-than-expected sales. This leaves the future of the Dawn of War series in question.