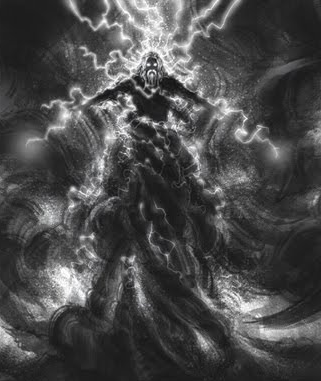 "I created you, and I will be your END!"
As flies to wanton boys are we to the gods.
They kill us for their sport.
— Gloucester, King Lear
Advertisement:

This trope comes into play when the supreme deity of a given setting is not just a mere jerkass — they are actively malevolent, a jealous, callous, sadistic, monstrous tyrant who created the world or universe to be such a miserable Crapsack World, preparing Disproportionate Retribution and an Easy Road to Hell for everybody else.

In some works, this being is the supreme deity of a Fantasy Pantheon, while in others, the being is a powerful monotheistic deity, with some works casting the Big Guy himself — or his nearest fantasy analogue — in the role. Sometimes, the being calling itself a god (or the God) isn't one (often to lessen the offense that religious readers might obviously feel when this trope comes in play); its powers are just so close to omnipotentnote whether it's due to being a Sufficiently Advanced Alien or, in the case of those claiming the identity of "God", being a god who is vastly more powerful than any and all of the other known gods combined (while implicitly leaving the door open for the real God to come in and show the interloper the error of their ways). that it makes no difference.

Narratives about a God that is both omnipotent and malevolent, and how we puny humans can cope with its abominable existence, can result in a Cosmic Horror Story, which is based on the complete helplessness and despair of us Puny Earthlings under the powers of an alien reality-warping madness-inducing entity. But while the Eldritch Abominations of your average Cosmic Horror Story will at least leave you alone if you don't seek them out (most of the time, anyway), a malevolent supreme god can be an absolute nightmare, scrutinizing our every thought and toying with us against our will, with us having little to no hope in doing anything about it.

Truth in Television: this viewpoint is Older Than Feudalism. Already some Greek philosophers considered the Olympian deities to be nothing but malevolent bullies. Lucian (2nd century AD) wrote a lengthy essay on why the Greco-Roman deities were evil, to boot. Likewise, the Norse sagas were full of description of Vikings who were goðlauss (godless)-they actively disdained the Norse deities, instead relying on themselves.

Compare and contrast Gnosticism and the Demiurge Archetype, note In short, Gnostics believed that the God worshiped by Jews and by the other early Christian sects was evil...but that he also wasn't really God, just a lesser celestial being with delusions of godhood. Everybody Hates Hades, God of Evilnote which this trope is not to be confused with; a God of Evil is a deity, not necessarily the chief deity of the setting, that represents the concept of evil, while the trope God is Evil is about a deity that is the chief deity of a setting that is evil but whose domain is not necessarily specifically the concept of evil, God Is Inept, God Is Flawed, Order Is Not Good. The flip side is Satan Is Good. See also: God and Satan Are Both Jerks, Devil, but No God, Neglectful Precursors, Jerkass Gods for when the deities are not really evil but just neglectful, Abusive Precursors for when this so called creator is beyond just guilty. Definitely the polar opposite of God Is Good. May or may not happen with a Corrupt Church - with that, the god is not guaranteed be evil, but those who serve (or claim to serve) him are. Unfeeling Heavens is where God is incapable of understanding or feeling mortal suffering.