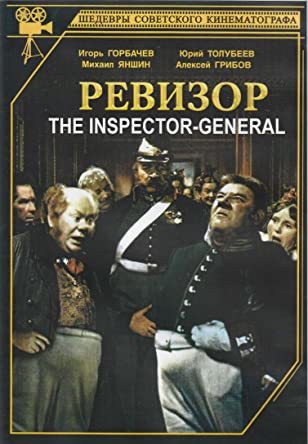 The Inspector General (Ревизор, Revizor, literally "The Inspector", also translated as The Government Inspector) is a comedy play in five acts by Nikolai Gogol.

The corrupt Mayor (or Governor, depending on the translation) of a small town receives a message informing him that a government inspector will be visiting the town incognito to investigate how it is run, causing a panic as he and his underlings hurry to cover up their misdeeds. A stranger to town, Khlestakov, is mistaken for the inspector; in fact he is an impoverished minor civil servant, and when he realizes why everyone is suddenly being so nice to him he takes full advantage to scam them for everything he can get. After his departure, the officials celebrate the apparent successful handling of the inspector's visit, until a message arrives revealing the truth about Khlestakov. As they start blaming each other, another message arrives: a summons for the Mayor from the real inspector.

Inspired the 1949 Danny Kaye film The Inspector General, which doesn't have a lot in common with the play.