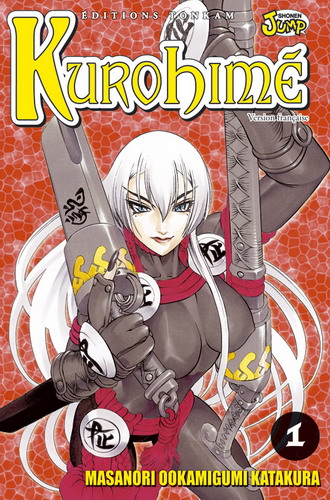 When a young child known only as Zero is saved from certain death by a powerful, beautiful witch-gunslinger known as Kurohime, he dedicates himself to justice in her name, and begins training to become a gunman himself. Ten years later, still in search of a now-missing Kurohime, Zero stumbles across a young girl calling herself Himeko, running away from the nefarious bandit Onimaru. As it turns out, Himeko, despite appearances, is much more than she seems—as evidenced by the legendary gun in her possession, Senryuu, she is actually the legendary Kurohime, turned into a child by the gods after a failed attempt to defeat them ten years ago.
Advertisement:

The only way to completely break the curse is for Himeko to experience true love; mild infatuation only weakens the restrictions temporarily. The only problem is that Himeko is not as nice as her cute face would lead one to believe. Subsequently, she and Zero embark on a long journey to break the curse, while uncovering the source of Kurohime's enmity with the gods.

Now with a character page.