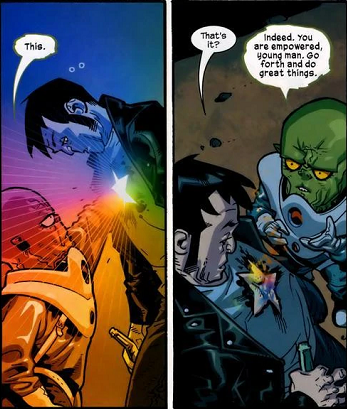 "You cannot harm me. You cannot stop someone who has been touched by Vorlons."
— Lyta Alexander, Babylon 5
Advertisement:

A character, initially having no unusual powers, gains them through interactions with some manner of Enigmatic Empowering Entity, usually powerful aliens or supernatural beings. Alternately, they might have very weak or useless powers amplified to godlike levels.

The powers may come in a wide range of just how much they can do:

Being Touched By Vorlons often, but not always, results in a character struggling to control their New Super Power. It may backfire morally because often With Great Power Comes Great Insanity, or literally in a Super-Power Meltdown.

Less frequently, this trope may be reversed and a supernatural being (possibly The Great Gazoo, if it's being played for comedy more than drama) loses his powers — again resulting in An Aesop.

This trope is closely related to Super Empowering. If the Vorlon that touched the character is marking them as their own, then it overlaps with Claimed by the Supernatural.

For the other kind of "touched" see Mars Needs Women or Boldly Coming. Although in a few rare examples they overlap.