Anime / A Letter to Momo 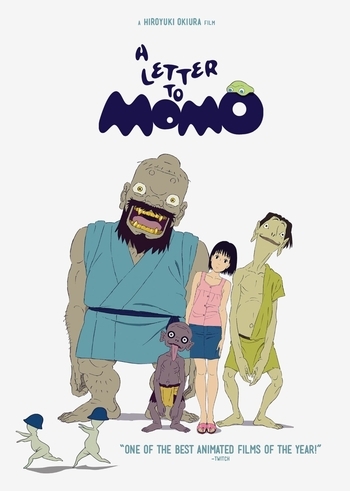 A Letter to Momo is a 2011 anime film written and directed by Hiroyuki Okiura and produced by Production I.G. Okiura was previously responsible for Jin-Roh: The Wolf Brigade, but as this film was not scripted by Mamoru Oshii, it is much easier to understand.

Momo Miyaura (Karen Miyama) is an 11-year old girl who has recently moved to her mother Ikuko's (Yuka) hometown on a small island in Japan's Inland Sea. She and her mother are in mourning after an accident that killed her father Kazuo (Daizaburo Arakawa), whose last words to her were the words "Dear Momo," the beginning of a letter he was not able to finish. Soon after she moves in, she realises she is being followed by three youkai (goblins); previous gods sent to Earth to watch over the living in order to atone for their crimes.

The film also stars Toshiyuki Nishida as Iwa, Kōichi Yamadera as Kawa and Cho as Mame.

A Letter to Momo debuted at the 2011 Toronto International Film Festival, and has also been shown at other film festivals in various cities worldwide, including Honolulu (USA), Glasgow (UK), Sitges (Spain), Warsaw (Poland), and Busan (S. Korea).